Energy utilities have been facing a major challenge for some years now: the high switching rate of their B2B customers.

In this article, we tell you how switching has evolved in the energy market and how to reduce it.

What is the issue?

Energy Utilities (also called suppliers), just like distributors and generators, are facing many challenges associated with the broader energy revolution.

In addition, the privatisation and liberalisation of these services over the past few decades in Europe has significantly increased competition and encouraged new and innovative players to enter the retail space, both for electricity and gas. As such, consumers, especially in the non-domestic (or business-to-business, or “B2B”) space, have benefitted from the choice and ease of switching between utilities, encouraging strong competition.

In response, utilities have been engaged in a “race to the bottom” to optimise their pricing for electricity and gas as commodities. Unsurprisingly, this has proved unsustainable for many utilities, who are now turning to new and innovative ways to both keep their existing customer base, and attract new customers away from competitors.

How did we get here?

An overview of Energy Market Liberalisation

In Europe, electricity and gas markets were generally monopolies within each member state comprising generation, distribution and retail. A process of liberalisation started taking place in many countries from late 1990s, when the European Union introduced new directives to encourage lower energy prices and improved customer service to consumers.

As a result, the existing energy monopolies were divided.  In most cases, the distribution and transmission arms remained as natural monopolies, privately owned, but subject to market regulations, while the generation and retail arms were privatised and liberalised. This allowed new generators to enter the market at a time when new renewable technologies were commercialising.  Further, utilities that were previously constrained by political borders could now operate in many parts of Europe, and were met with a rise in new companies entering the energy retail market too.

This process of liberalisation in the energy retail space is at different stages across Europe, with implementation differing between member states and also internal regions. While Bulgaria and Malta still operate in a monopoly situation, most other member states are working towards or have already established mature markets offering a choice of 100s of retailers to consumers.

However, many of these new utilities still only hold a small share of the market, although trends in mature countries such as the UK show market share dropping significantly for the larger suppliers there (or market incumbents).

The explosion in the number of energy retailers in mature European liberalised markets has resulted in a highly competitive landscape, both for electricity and gas.

The concept of shopping around and switching between energy utilities has become the norm for many customers.

The following chart shows that this phenomenon is occurring for a significant share of consumers and is something most European countries are experiencing.

Taking the UK as an example, the number of domestic and business customers switching between suppliers more than doubled between 2014-2019. A culture of mistrust of traditional utilities, coupled with innovative pricing schemes and offers from newcomers, has resulted in over 50% of these switches going in the favour of suppliers other than the group of the “Big 6”.  In the UK, according to Energy UK’s latest data on electricity switching, the number of customers changing to a new supplier (gas or electricity) was about 5 million in 2021.

A breakdown of the electricity supply market shares by company from 2004 to 2022 can be found in the chart below. It can be seen that switching is a continual reality for suppliers, who need to constantly keep on top of their competition, at the threat of losing market share.

While this has brought benefits to consumers in the form of choice and highly competitive prices, this has also meant falling profit margins for many suppliers, and a volatile market with some suppliers exiting the market each year.

The UK energy market regulator, OFGEM, estimates that profit margins for the larger energy suppliers in the UK in 2018 fell to an average of 3%. This has led to cost cutting across the board, often affecting customer support and leading to errors in reporting and billing, etc.

As a result, especially for business customers, this has seen growing numbers of complaints and increasing customer dissatisfaction. This is especially true for very small businesses, who do not have the purchasing power of large industrial customers and are therefore often paying much higher prices. Such low profit margins also mean that the cost of new customer acquisition needs to be low and the utility must be confident of keeping a new customer for a long period of time, in order for that customer acquisition to be profitable in the long term.

How to improve Customer Satisfaction and reduce Churn

So far, we’ve established that many utilities and suppliers in Europe are facing increased competition and pressure to provide improved customer satisfaction for fear of losing customers to the phenomenon of switching.

As a result, many utilities are on a mission to capitalise on creative new ways to keep customers satisfied. This involves utilising new technologies now being rolled out in the energy industry, for example, clean energy generation and smart meters. Investing in new clean technology assets, such as solar, electric mobility and energy efficiency, is changing the face of energy retailers, who in many cases, have traditionally been the coal and gas generators. This helps to change customer opinion and perception.

The use of data from smart meters and other sources (such as weather data, building information, etc.) is also being used by retailers to improve their customer engagement. For example, utilising information about customers to provide tips and recommendations to improve energy efficiency can help the consumer reduce their energy bill and start to build back trust in their utility.

While on the surface, this might seem confusing as it also reduces the revenue made by utilities, we just need to remember that profit margins in the pure sale of energy are in the low single digits now for many retailers, and so the loss in profit from selling the energy commodity is easily covered by customer retention and the possibility to upsell new products in the future.

How to offer new Revenue Streams?

Due to the low profitability of selling energy as a commodity in a liberalised market, many European utilities are turning to additional products and value-add services to supplement profits and create new revenue streams for themselves. This might be achieved through internal organic growth or through the acquisition of companies offering these sorts of products and services already.

Examples of such new revenue streams include:

While utilities have identified mature technology options and sufficient consumer interest, there have been varying degrees of success in making significant new revenue from these solutions.

As such, there has been an increase in new tools for retailers to use to make this transition to new revenue streams successful. For example, for those utilities who are given regulatory approval to use the billing data from their commodity customers, this data can be used in cooperation with new artificial intelligence tools, to help utilities identify which of their existing commodity customers would be most suitable for a particular new service or product.

This aids in more accurately simulating uptake expectations of new products, and reducing marketing and sales costs in the customer acquisition process. The same information, especially when used with new smart meter data, can be used by customer support teams to upsell new products while also providing a more tailored and in-depth solution to customer issues.

We have seen that energy markets in Europe have been radically revolutionised over the past few decades since liberalisation was introduced in many countries.

As a result, the newly independent energy utilities have faced significant competition from new players who are offering modern and innovative products. This has led to the phenomenon of switching, where many customers are frequently choosing a new supplier who can provide services as lower costs. In order to stay competitive and retain significant market share, utilities have been forced to revolutionise their customer engagement techniques and also offer a range of new energy-related products and services as complete new revenue streams for their businesses.

Employing the right tools to do this is vital to ensure the long-term viability and survival of many energy utilities.

Get inspired and learn about tools that will help your energy utility to decrease switching rates in B2B markets. Download the specialised guide for utilities and discover what new value-added services you can offer to your customers!

Mio Dart  was part of the Dexma team until 2020, bringing her energy industry expertise to our sales team. She still collaborates with us on the research and copywriting of great-quality content. 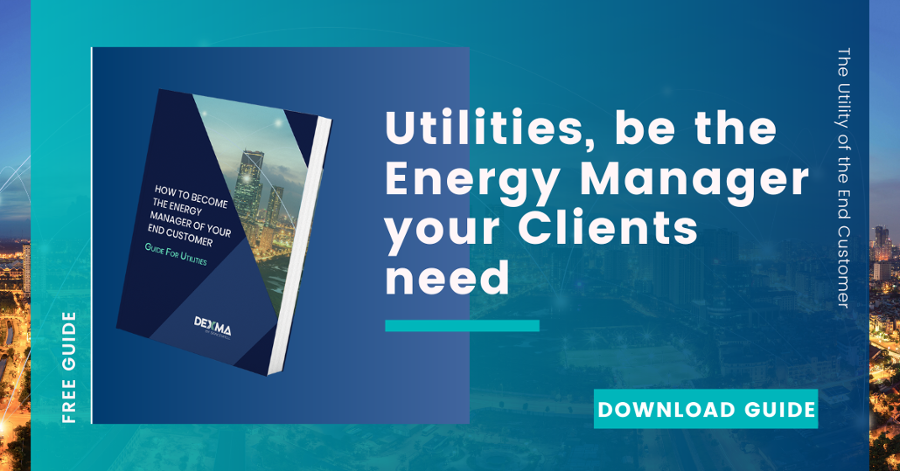