Energy manager readers of this blog know it better than anyone else: uttering this bland phrase generates skeptical squints, a few eyerolls, or at best, a half-hearted shrug among colleagues and customers alike.

So why is energy efficiency met with such indifference? And what can be done about it, if anything?

Good news: there’s a groundbreaking initiative out there that’s changing the way businesses are talking about energy management, and you can become a part of it! Read on to discover more…

Should we drop “energy efficiency” from our vocabulary?

“Energy efficiency has all kinds of problems as a label,” Dr. Fawkes admits. “It is a confusing technical term, it is boring to most people, it still has negative connotations of saving and getting by on less, it threatens energy suppliers, it is invisible, it does not lend itself to photo ops or big political announcements, and it leads to all kinds of pointless, endlessly resurfacing, debates based on the Jevons paradox.”

OK, so it’s important to talk about energy efficiency in a different way. After all, it really does transmit a negative feeling of frugality and deprivation – all that nagging to turn down the thermostat or put on a jumper can be downright exhausting for all parties involved. Is that really the best we can do?

Turns out there is a more positive way to message energy efficiency, and it starts by replacing it with the term energy productivity.

The case for energy productivity

Energy productivity refers to how much value that can be created from every unit of energy.

There are many different ways to measure energy productivity, such as revenue, number of units produced, floor area, sales, or even GDP, all per unit of energy used.

This is key, because it makes energy productivity a more positive, business-friendly term that “speaks the language” of key corporate stakeholders and decision-makers. Improving productivity generates revenue for business – it’s hard for even the most stingy CFO to argue with that.

But is it enough to simply do a little rebranding and replace the term “energy efficiency” with something sexier sounding?

It’s not that we are forgetting about energy efficiency altogether, either. In fact, the two are closely related: while the idea of “efficiency” speaks to those obsessed with cutting costs (like your CFO), improving “productivity” appeals to the grander potential for balancing how your company sources and uses energy with steady growth. The two are not mutually exclusive by any means.

Jenny Chu, Head of Energy Productivity Initiatives, The Climate Group, said: “The urgency for increasing the adoption of energy efficiency and clean technology innovation has never been greater and the business case has never been clearer: doubling energy productivity is good for the climate, good for companies’ bottom lines and good for the global economy.

But as the old adage goes, actions speak louder than words. And actions framed as SMART goals speak even louder! This is where the EP100 comes in:

EP100 is a global, collaborative initiative of influential businesses that pledge to double their energy productivity.

Created by The Climate Group, the EP100 pledge can be signed by any business willing to commit to double the economic output achieved per unit of energy consumed within the next 25 years. For those that want to focus on a smaller goal of improving productivity by 2.5 per cent annually can also participate.

“When you say ‘energy efficiency’ people’s eyes glaze over, they think it’s something that only engineers should understand and should care about,” affirms Jenny. “When you attach productivity to the word ‘energy’, that’s when you start to capture the attention of a broader range of stakeholders, including those in the boardroom. That is why the EP100 campaign firmly focuses on the concept of productivity, rather than efficiency.”

By focusing on quantifiable results, companies can decrease their energy demand and while contributing to reducing energy demand globally. At the same time, companies that commit to energy productivity are boosting competitiveness, accelerating innovation and becoming more resilient, all while reducing greenhouse gas emissions, creating jobs, and improving energy security.

To learn more about the EP100 initiative, hear its success stories and learn how to become an EP100 company, join our live Q&A session with Jenny Chu on June 27th.

Places are limited, so register below to reserve your seat: 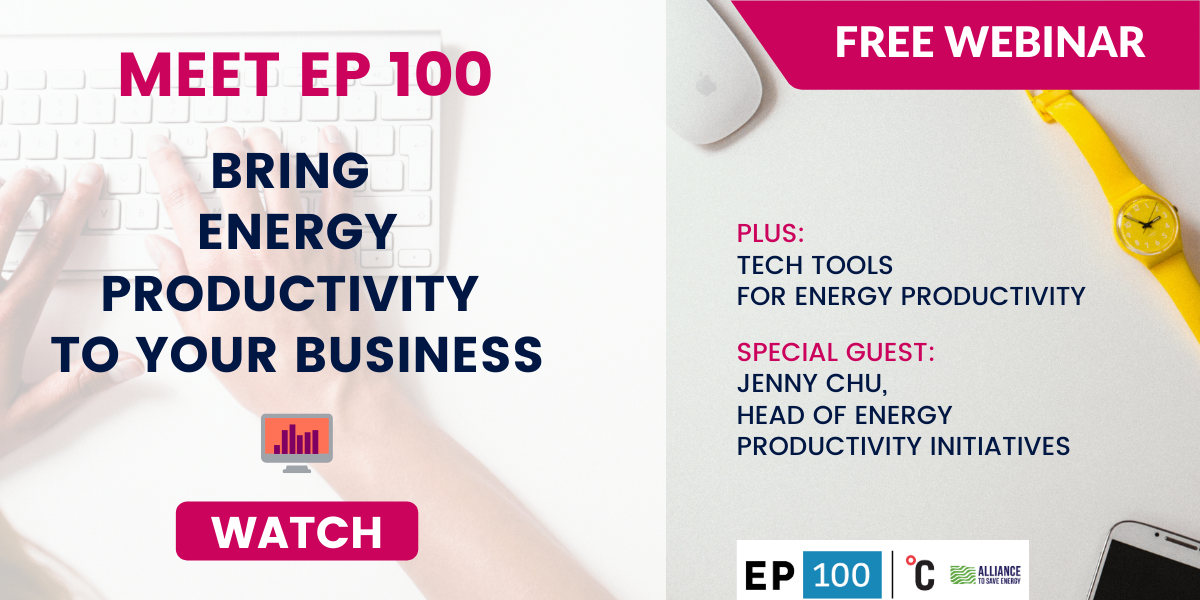