The communications sector continues to grow every year, driven by the societal need to be connected at all times and to have access to information in real-time. In the UK, the sector keeps 68.9 million inhabitants connected to the world. In 2020, the revenue generated by British telecommunications amounted to £31 billion.

Every day, telecommunications providers try to improve their offerings to meet the increasing demand for higher-speed networks. And in an extremely competitive industry with demanding customers who want to find the best deal on the market to satisfy their requirements, companies have no choice but to adapt to stay relevant.

In this article, we will talk about the challenge of energy efficiency in the telecommunication sector through the example of Ooredoo, a Qatari telecom provider.

It is no surprise that telecom companies are among the biggest energy users in the world. With rising utility costs, it has never been more critical to reconsider the way they operate. Cost reduction, keeping customers satisfied whilst lowering their impact on the environment…all aspects must be taken into account. In this sense, sustainability is an important topic that should not be disregarded, especially with the rising educated consumers concerned about their ecological footprint, but also, particularly with the large number of socially responsible investors who want their funding to reflect a good deed.

These behavioural transitions are pushing telcos to shift their paradigms, rewarding those ready to take the leap with an undeniable competitive advantage. These changes also represent a great opportunity to reduce their expenses, as implementing energy efficiency measures could potentially lower telecom operational costs by up to 20%.

Costs and energy consumption sources are more or less similar to all telcos. As per industry estimates, 5G spectrum bands consume twice as much energy as 4G’s, although they are said to be more energy-efficient per gigabyte.

In addition, and as surprising as it can be, most of the squandered energy is not wasted by the users but rather by the source, called Radio Access Network (RAN). Indeed, more than 75% of the time, the radio base station resources remain unused because of the hardware components activated at all times to transmit system information and synchronisation and reference signals. In fact, these networks were originally built to maximise connectivity, not energy efficiency. Therefore, to avoid waste heat, some of 5G’s newest RAN are equipped with an energy-saving measure allowing for the automatic switching of components. For instance, the Ericsson AI-powered MIMO mode improves performance at the node, thanks to automation.

Some other energy efficiency measures can also include the use of renewable energy sources (hydrogen, wind, solar etc.) to supply the energy needed. For instance, in the UK, Vodafone has built two self-powered eco masts to meet their net-zero target by 2027.

Of course, operators cannot achieve their energy efficiency objectives all by themselves: all actors (e.g. vendors, third-party data centres, outsourced business operations etc.) must be involved and share the same vision. Properly defined KPIs, a common framework and reporting criteria need to be set correctly to ensure every agent is aligned.

There is no such thing as a magic formula: small and bigger improvements must be made at every level so that the global industry can reap the benefits of efforts made by one of the most important sectors, on which billions of people depend.

Headquartered in Doha since 1987, the Qatari telecom operator Ooredoo is considered one of the largest mobile organisations worldwide with a database of more than 121 million customers as of 2021. As a leader in its market, Ooredoo offers various services such as mobile, fixed, broadband internet and corporate managed solutions across different markets including the Middle East, North Africa and Southeast Asia.

Qatar is one of the Gulf Cooperation Council (GCC) members alongside Bahrain, Kuwait, Oman, and the United Arab Emirates (UAE).  With an average of 17.923 kWh/year, Qatar is one of the largest energy consumers worldwide and the largest in the Arab world. To illustrate, the country’s consumption is said to be 4 times that of the UK.

Rapid economic growth, including the development of large-scale infrastructures, heavy industries and petrochemicals, among others has led to substantial use of electrical power. This can also be explained by the increasing living standards coupled with the low pricing of electricity in Gulf countries. In addition, the difficult weather conditions have led to an energy consumption peak in summer, due to the exorbitant use of air conditioning.

Historically speaking, oil and gas have always been the dominant fuels powering the economy of the Gulf States. However, for a few years, the energy sector has been undergoing a transformation aiming at diversifying the energy mix. Indeed, using renewable energy sources (especially photovoltaic) is an opportunity for these countries to reduce their environmental impact as well as release some energy production for exports, highly contributing to the countries’ GDP.

Moving in this direction, Qatar has set the objective to produce 20% of renewable energy by 2030, according to the International Renewable Energy Agency. The country’s general renewable energy strategy’s scope includes the increase in energy efficiency, the uniformisation of emission sources and the reduction of flaring and venting. Finally, by committing to the Paris Agreement, the country has accelerated its shift toward a more sustainable strategy and is now leading the way.

The Energy Challenge for Ooredoo

In that regard, the smart energy initiative taken by the Qatari telecom Ooredoo is aligned with the country’s general strategy. From Ooredoo’s perspective, it was critical to improve its offices’ energy efficiency and realise its mission of building the “smart cities” and “smart stadiums” of tomorrow.

Various players were involved in the process to reach the goal of better management of Ooredoo’s energy consumption:

All worked together, toward producing a functional energy management solution in the Ooredoo offices.

The Benefits of Implementing an EMS in Telcos

Many advantages come with the use of an Energy Management System (EMS) and the case of Ooredoo is a good example to demonstrate it.

Implementing an EMS, such as the DEXMA Platform allowed the Qatari telecom to better track, monitor and manage offices’ energy usage and to improve its management at a micro-level.

DEXMA Analyse actions have allowed Ooredoo to save a high amount of cost, manage and collect consumption from different locations, and thus cross-check bills with Kahramaa, the national utility provider in Qatar. Finally, DEXMA defined a savings potential of 25% in Ooredoo Tower’s energy consumption.

Do you want to read more about energy management in the telecommunications sector and the case of Ooredoo?

Don’t hesitate to download the free case study below. You will discover the details of the collaboration with our Partner Plug and play and how we helped Ooredoo manage its energy more efficiently. And don’t miss the other success stories in the resources section. 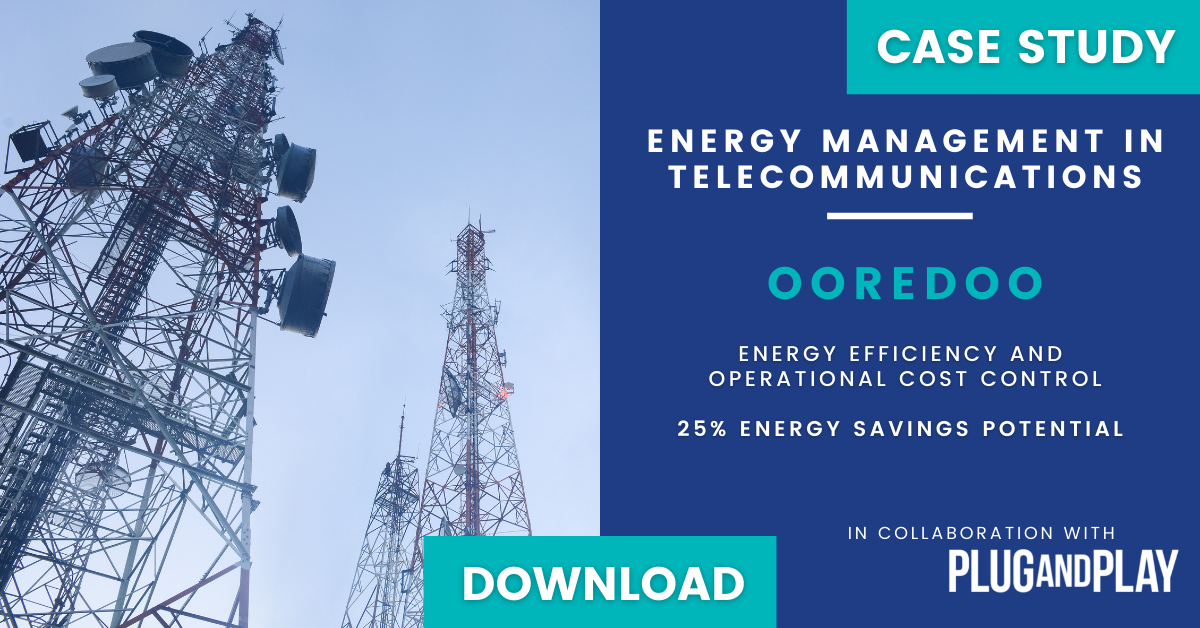