Industrial energy efficiency is all the rage thanks to public support initiatives for “Industry 4.0”. But how does this trend translate into an actual energy management plan in the industrial sector? Is it possible to save energy in factories without a major investment? Get inspired by the TACSA success story, implemented by DEXMA partner 3ex4.

Is Spain failing when it comes to industrial energy efficiency? According to a World Bank report called RISE (Regulatory Indicators for Sustainable Energy), Spain ranks 22 out of 111 countries in terms of energy efficiency. In terms of global performance, it’s not too bad – but we still lag far behind most developed countries.

With an energy dependence of 73%, well above the European average of 53%, Spain cannot afford an industrial sector that wastes energy.

Our partner 3ex4 knows this and has been implementing energy efficiency projects in manufacturing plants and industrial facilities for years. This success story of energy efficiency in industry comes from TACSA: a company from the metallurgical sector with two production plants that dramatically reduced its energy consumption and costs.

How TACSA saved € 110,000 with its Industrial Energy Efficiency Plan

TACSA’s main business activity is applying coating to metal parts via cataphoresis painting. Following a period of crisis in the industrial metallurgy sector, exacerbated by the economic decline of its main clients (the automotive sector), TACSA ended up in the red in 2014.

Energy consumption represented 11% of TACSA’s total operating costs – a sizeable chunk ripe for optimization! By reducing energy costs, TACSA saw the opportunity to increase its margins, invest in its economic situation and be competitive and attractive to its customers.

TACSA’s industrial energy efficiency plan is implemented in its 2 plants and has been based on implementing, with the help of 3ex4 the following improvements:

Results of the TACSA and 3ex4 Industrial Energy Efficiency Plan

These improvements were carried out by monitoring and analysing not only the overall consumption of each plant, but also their sub-consumption. The success story of TACSA is particularly interesting since it includes both electricity and gas metering and submetering.

By implementing these measures, TACSA achieved a savings of  € 110,000 while significantly improving production ratios. 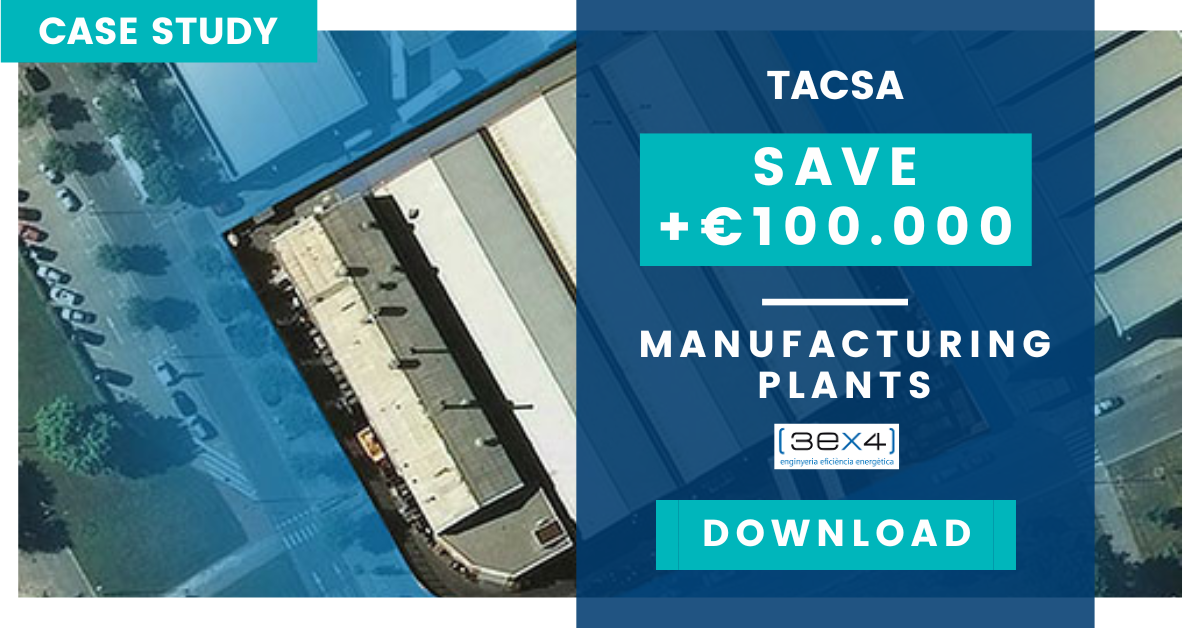