In between Covid-19 and the various green recovery plans for Europe, 2020 has been a busy year in terms of social and environmental impact for the Old Continent. No matter how the year has been lived by everyone, it is now behind us; and it is time to take stock of it.

Since Ursula von der Leyen’s arrival at the European Commission in July 2019, there have been several decisive turning points: such as the European Green Deal, and the Climate Law voted in the European Parliament.

Meanwhile, the global pandemic has forced governments to readjust their plans. And although Covid-19 seems to have slowed down the economy in general, we can’t say that it had a special positive effect on climate change.

Covid-19: What has been its impact on Europe’s CO2?

Like the dolphins in the Venice lagoon, certain images have left their mark since March, and seemed to offer a beneficial break in the sanitary hell of 2020.

And yet! Covid-19 had a negative impact on the climate in general.

On the one hand, there is a rather obvious reason for this: in the face of the health emergency, many issues, even very pressing ones, have been put on the back burner.

This is obviously the case for the fight against climate change, which is often relegated to the bottom of the European public policy agenda.

This has not been the case everywhere, but Central and Eastern European countries, in particular, have reported putting on hold, even temporarily, this subject in order to give priority to national protection measures.

On the other hand, the slowdown in economic activity was not constant throughout the year, with attempts at recovery – times when sometimes there was a dramatic increase in greenhouse gas emissions. The unstable operating movements in production and transport have the effect of a rather monstrous energy cost.

This year, of course, the mutual causal links between such epidemics and environmental disruption have been raised. Both icecaps and deep forests are cruelly damaged, and the biomass they contain, once out in the open, can be disastrous for human contact.

2020, a year in favour of sustainable growth

Despite this health crisis, main concern of 2020, life didn’t stand still. Production and consumption have continued, and the energy sector had its ups and downs. However, green energy had the wind at its back.

Nevertheless, this relevant score, which is the result of a long-term effort and not just a 12-month period, conceals significant disparities between countries. 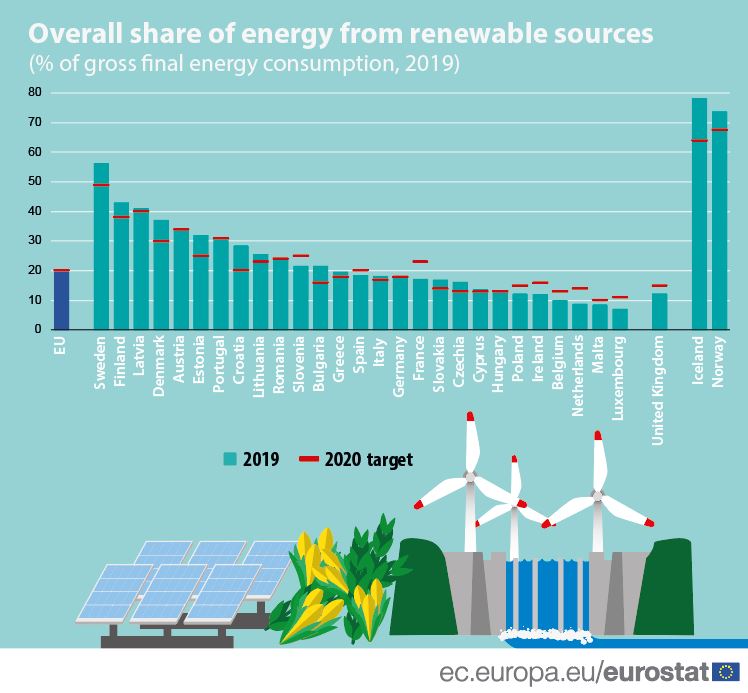 Iceland (78%), Norway (75%), Sweden (58%) are the countries with the highest green electricity consumption according to Eurostat data. In the case of the United Kingdom, it’s positioned among the last places, reaching 12% of energy consumption from renewables in 2019. It must be said that European households and large consumers (SMEs and Industry) are increasingly tending to switch to another supplier (Switching Rate) that offers green electricity.

Moreover, it is difficult to quantify precisely in a single year the real impact of growth from a climate point of view, but 2020 is in line with European policies in this area for the last twenty years.

The medium and long-term greenhouse gas reduction targets remain the focus of national and European institutions. In this respect, for example, the target set in 2008 to reduce greenhouse gas emissions by 20% seems to have been achieved overall.

However, this is not the case for the energy efficiency of renewable production mentioned above: for Brussels, they remain a priority for the coming years. The EU also needs to take into account the “imported” carbon in its future calculation methods, which seems to have increased considerably with the numerous relocations of European production.

It is still too early to quantify to what extent the concerted policy of European countries is moving in the right direction. It is likely that some targets will be revised downwards.

The climate problem has worsened this year in the European Union. Indeed, the EU has relied heavily on the budgetary debates that are shaking (or even tearing) the Parliament and the Commission apart.

This is why, for example, the growth recovery plan voted in December, after months of negotiations, allocates a part of the European budget to so-called “green” growth.

And that is the problem: what percentage?

The various possibilities that were circulating here and there have finally converged towards the figure of 37%, which was finally approved a month ago. A figure that may seem decidedly optimistic, but which is far from unanimous for Strasbourg, and not necessarily among the more climate sceptics.

On the contrary, several political groups have rather underlined the lack of ambition of this plan in terms of climate emergency. This is a continuity with the European Commission’s previous mandate, which has often been criticised for its softness in this area.

The power relations within the European institutions is far from being appeased on the environmental issue, and this is all the more true for a crucial aspect of the European Green Pact, namely the objective of climate neutrality in the coming decades.

After intensive exchanges between various members of the EU institutions, sometimes even within the legislative and executive bodies, the figure of 55% for 2030 was maintained. It remains to be seen what concrete measures will be implemented in the coming years.

Our house is still burning and even if everyone doesn’t look the other way, we are powerless to find collective solutions to the climate crisis.

Clearly, the global pandemic has not helped to focus on this issue since it has been necessary to first save lives and secondly to restore local economies; and this is likely to continue for at least the next few months.

However, the ambitions are there: Europeans are still quite receptive to the environmental issue and are willing to change their habits in both production and consumption.

It is up to the supranational institutions to put in place the means for the various members of Europe to change the situation, in particular by continuing to raise their ambitions.